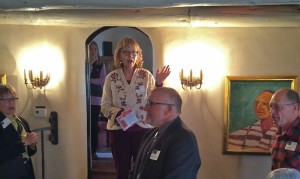 Yesterday was a busy one for Taos Summer Writers’ Conference and Rananim founder, Sharon Oard Warner, who also serves as co-chair of the D.H. Lawrence Ranch Initiatives. The day was also incredibly special. Visiting from her home in Toronto was Joanna Terry and her husband Richard. Joanna happens to be the great granddaughter of Frieda Lawrence. As Sharon led Joanna from event to event through Taos, it was an emotional and overwhelming day for everyone involved. Robert Cafazzo has written about it on his blog, Two Graces Taos, where you can also find great photos from the day and a video of Joanna Terry.