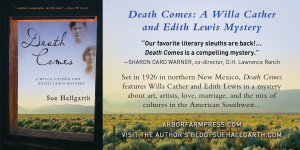 Aside from the connections between D.H. Lawrence and Mabel Dodge Luhan—and between the Kiowa Ranch near San Cristobal that Mabel Dodge Luhan traded for the manuscript of Sons and Lovers and her famous adobe compound in Taos—I chose to use the D.H. Lawrence ranch as one of the main settings in Death Comes because Willa Cather and Edith Lewis visited Lawrence there in the summer of 1925, because it was remote—twenty miles from Taos and the Mabel Dodge Luhan house—and because it could easily be mysterious.

Cather and Lewis’ visit to the ranch in 1925 was actually the second time they met D. H. Lawrence. The first occurred the previous year in New York City, when Lawrence was in negotiations with Alfred Knopf, Cather’s publisher. Knopf began publishing Lawrence in 1925, starting with St. Mawr, followed by The Plumed Serpent in 1926, and in 1928, a heavily abridged edition of Lady Chatterley’s Lover. Cather’s books had experienced a dramatic increase in sales after she signed with Knopf and so would Lawrence’s. But even before Knopf released St. Mawr, Cather improved Lawrence’s financial situation by suggesting to Knopf that he send Lawrence a “royalties advance,” for which Lawrence thanked Knopf in a May 4, 1925 letter.

An odd gesture for one author to make for another, especially after they had spent only a few hours together the previous year? Perhaps. But because of Cather’s partner, Edith Lewis, they knew a great deal about each other well before they met. In 1921, D.H. Lawrence met the artists, Earl and Achsah Brewster, on the island of Capri. Achsah had been Edith Lewis’s roommate at Smith College and they remained close, corresponding often, and both Lewis and Cather had visited the Brewsters in Europe.

I knew some of this history when I began to think about writing Death Comes, and I had more than once visited Kiowa Ranch and Mabel Dodge Luhan’s. I had also introduced myself to Kevin Cannon, who now owns Luhan’s pink adobe and invited me in to see where Cather and Lewis stayed while in Taos and where, to my surprise, D.H. and Frieda Lawrence had also stayed. Cannon showed me Lawrence’s painting of the vase and phoenix I describe in Death Comes. 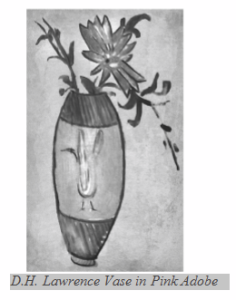 In the novel, Cather and Lewis are settling in for their second stay in Luhan’s pink adobe when they talk about the vase:

I still love this,” Willa was chatting [to Edith] through the wall as she moved about, changing the location of dishes and pots to clear a small table for use as a desk. Edith could picture the vase precisely, tall, thin and oriental with a phoenix painted on its side and a bright red chrysanthemum, whimsical with touches of yellow and orange, leaning from its mouth. It was not a real vase at all but one D.H. Lawrence had painted on the door of the room’s only cabinet the year he and his wife Frieda occupied the pink adobe. Soon after their stay in the pink adobe they had moved to Kiowa, the ranch near San Cristobal that Mabel gave them in trade for the manuscript of Sons and Lovers.

“Yes, I do, too,” Edith responded. “Maybe if Tony’s feeling up to it we could arrange for another trip to their ranch this summer.” She remembered the view of the mountains from the porch of Lawrence’s small rustic ranch house near the tiny town of San Cristobal, eighteen miles to the north and five hundred feet above the seven-thousand foot elevation of Taos.

The pink adobe is where Cather and Lewis stay during Death Comes. Luhan’s storied adobe across what is now a parking lot is one of the primary locations for the novel’s action, but Lawrence’s Kiowa Ranch is the other. The first scene at the ranch introduces two important characters who are staying at the ranch, Adam and Maria, and sets up all that follows.

Adam hung the ax on its pegs above the door and latched the door before carrying the new bundle of kindling to the box next to the stove. It was late. The sun had been down for quite a while and he was tired. Time to build up the fire so they could heat their beans and tortillas.

They would eat in silence, Adam at the table, Maria on her stool near the open shelves storing their few dishes. He expected nothing different. It had been a week since he arrived at Kiowa and found the ranch house broken into and still occupied by a huge young man with shaggy blond hair, an unshaven beard, and a dark scar that ran from the left side of his forehead to his right ear. Adam flinched when he said his name was Blade.

That’s about all the man did say. Adam hurried to explain that the owner had sent him to live at the ranch as a kind of caretaker. His rush of words felt lame even to Adam, and Blade resisted leaving until Adam offered him a couple of dollars to clear out quietly. But once Blade gathered up what he had strewn about the few rooms and called to someone outside, Adam learned that his problem was larger than Blade.

Maria, blouse torn at the neck, skirt caked with mud and dried grass, sandals loose on both feet as though they belonged to someone else, emerged from the tiny cabin behind the house. Adam could not see her face because her long brown hair fell across it and she did not look up but pressed against the cabin’s exterior and splayed her hands across its logs as if expecting to be hit. Adam moved toward her, but Blade spun him around and said just two words. “She’s mine.”

Stunned, Adam stood a very long time in what felt like a stupor until he came up with two words of his own. “Sell her?”

Blade dropped his grip. “Ten dollars.” Exactly the amount Adam had in his pocket.

When Blade left, Adam fitted the doors with inside bars to serve as locks and gathered what scrap wood he could find to barricade the windows. Then he, with Maria, cleaned the two cabins. Maria said nothing. Adam could understand only a few words of Spanish and he was not sure Maria knew English. He was sure that she remained too frightened to speak. Adam would have to check this situation out with Spud when he finally went down the mountain for supplies. Spud would know what to do. Spud had, after all, sent Adam to the ranch so he would have a place to stay and paint his mountain landscapes until Lawrence returned.